(this page is under construction) 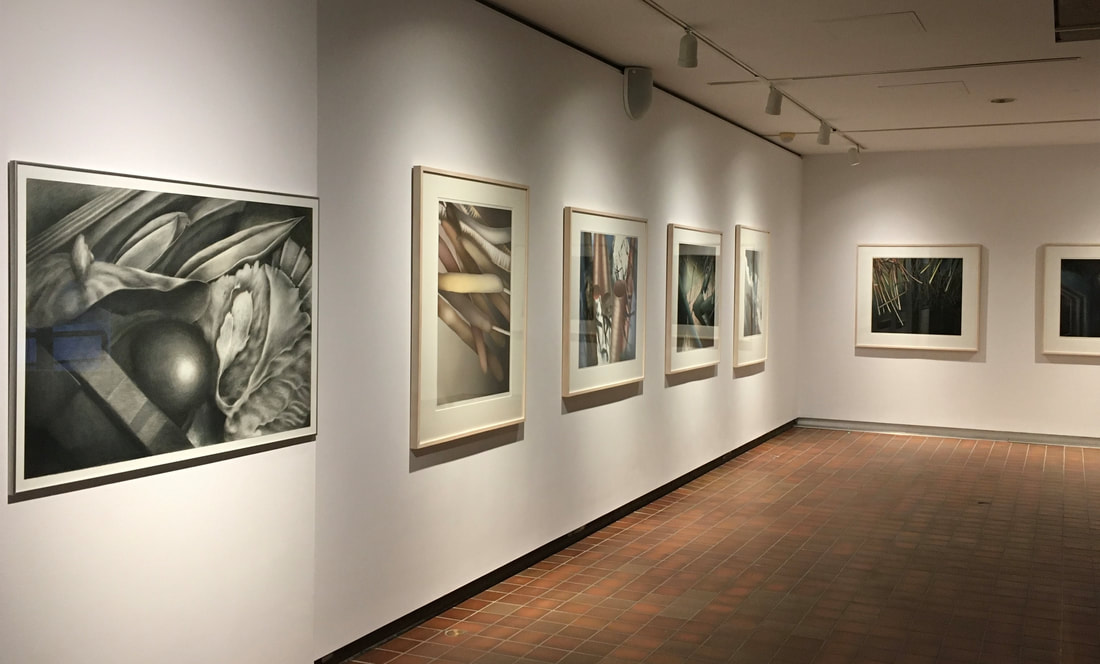 “Arguing draws a line linking corridors through chaos with reason. Art, by contrast, is the whole ball of wax — a system, coherent, chopped out from chaos and held.”
― Annie Dillard, Recalling Niels Bohr

“I collect stones and fancy there is something to it.”
Hans Jurgen van der Wense, A Shelter for Bells

I.
I am examining on my kitchen counter three sets of dried persimmon flowers—the leathery remains from which emerge the soft, orange fruit—their undersides each lined with a perfect square of velvet. I stare at them touching, petal-to-petal, in the beginnings of a wreath.

I recall Jack Damer beginning one class with a question: how does an artist make work about the death of a loved one and have it evaluated on its own merit—separate from the validity of the source emotion—as a work of art? He went on to hypothesize tactics through which one could step outside of their individual grief, and engage the viewer as more than witness to an act of private therapy. One hypothesis, so particular I wondered if he was speaking from experience, was an image of the open casket of one’s father, the funeral bouquets multiplied to such extents that the work would be filled with nothing but flowers.

I am reminded of this experience twice-over when surveying the works of Lyndal Osborne; first, walking into the Nickle Galleries at the University of Calgary in the fall of 2018, and being confronted by her installations of overwhelming accumulation: dozens of grass balls capped in arrays of detritus—artificial teeth, rhubarb seeds, shark eggs—, thousands of glass jars forming a river that carries even more objects away in its swells. The second reminder comes while reading the essays on Osborne’s work in catalogues which span her career. Authors return time and again to her childhood, to her collecting habits growing up in Australia, and to the influence of her parents. Her father, invoked in the work by an orb of birch twigs, her mother in a paste necklace resting on a mound of compost. The resulting images are richly interpretable, but they are not necessarily decipherable in any literal sense.

Damer’s work similarly begins with recognizable objects, generally mechanical rather than natural, and explodes them into flurries of component parts. Whereas the line-work often hearkens back to a draftsman’s trained precision, and to Damer’s youth as a participant in motorcycle racing and custom car culture, the accumulation obscures any chance for the work to function as diagram. Works portraying disassembled planes and drones in response to the United States’ ‘War on Terror’ are no more understandable than the conflicts they enact, and breaking them down to their constituent pieces does not offer any guidance toward deconstructing their deadly possibilities. Damer’s colleague T.L. Solien recently referred to a change in our potential understanding of such works: “The world has evolved to shift the nature of Damer’s work from a representation of a kind of science fiction, to reflecting the darkness of the contemporary world, where truth is no longer found on the surface, but exposed only when layer after layer is peeled away, much to our horror and dismay.”

I return to Damer’s query: how does one make art from grief that transcends its origin, surviving to communicate with an audience beyond its maker? I ask myself this question from the point of view Solien invokes: of a world at war, a planet in the throes of environmental disaster, and a global population sharing the effects of an ongoing pandemic—each perpetuated for sake of ‘the economy;’ the only global system that never seems endangered by the apocalypse it commands (to wit, Fran Lebowitz, hearing playwright Jeremy O. Harris refer to our supposed age of ‘late capitalism’ rejoins: “it can get much later than this.”).

II.
There is a form of seeing that one encounters in Wisconsin art several decades before Damer arrived in Madison to teach, and before Osborne arrived there as a student. Typified by the paintings and drawings of John Wilde, Sylvia Fein, Dudley Huppler, and Gertrude Abercrombie, these Midwestern magical realists recognized the spectacular within the minutely-discerned everyday. As strange as their most dreamlike compositions become, their work communicates that there is always something stranger about the sights we thought we knew becoming alien upon observation. When was the last time you really looked at a stalk of bloody rhubarb freshly cut? At the claws of still-warm sparrows, the swollen stems of kohlrabi, the back of your hand?
Book artist Walter Hamady once recalled a lesson from John Wilde: that the birdwatcher does not look for the bird, but stares unfocused, taking in everything at once, without judgment, waiting for movement to focus the field of vision. Put another way, by Louis Pasteur, “in the fields of observation, chance favours only the prepared mind.” Damer and Osborne share this outlook, ever attuned to things capturing their attention from the broad din of images filling our world. That their work is so rich with marks suggests the regularity with which they are fascinated—an open mind, where rather than single, dogged goals, there are bountiful possibilities.
The work becomes evidence of time spent—making and thinking and coming to terms with the world in its complexity; observing and accepting such complexities rather than attempting to define categories. They are object lessons: watch the drying grapefruit skin close in on itself. Note the colours in the smoke relayed from the site of the disaster—the ashy grey broken down by the television monitor into pulses of red, green, and blue. There are pictures hidden for us in the molding compost, and in the infinite reflections of our chromed machines. We might recall an admonition from Walker Evans: “Stare. It is the way to educate your eye and more. Stare. Pry. Listen. Eavesdrop. Die knowing something. You are not here long.”

III.
Perhaps it is not shocking that two artists with such long and involved relationships to lithography would become attuned to important but easily overlooked minutiae—the magical glint within the seemingly minor object. Lithographers take notice of the denizens of their stones—fossils, veins of iron oxide, and hairline cracks which may spell disaster when printing. They tend to the grease reservoirs imparted by their drawings, and maintained through bathing the drawings in the acidic gum of North African trees, massaged into the stones by aid of their body heat in a laying on of hands. One of the primary tools of lithographic drawing, alongside the crayon, is the greasy black liquid called tusche, which is puddled on stones to produce washes or used with finer brushes for line work. Tusche is etymologically traced back to the French toucher: to touch.
This in mind, it almost seems a shame when Osborne’s installations are collected by institutions, whose care is mediated by white gloves. One reads the museum condition reports and detailed lists of materials and tries to recreate the sensual experience it must have been to make such objects—cutting, drying, and bundling wild grasses, or rubbing stove black into the contours of iron pyrite lumps and sealing them with fragrant carnauba wax. The material attraction of Osborne’s installations is not separate from the haptic knowledge imparted to them through layers of her touch. Endless forms, most beautiful to the eye and the hand.
They draw to mind the ceramicist Edmund de Waal, a connoisseur of touch, and the power it holds as an element of a work of art. In his book The Hare with the Amber Eyes, de Waal traces his inheritance of 264 tiny netsuke, the tiny boxwood or ivory figures made in Japan as toggles, which he inherited from a beloved uncle. He travels to the locations they have lived—Paris, Vienna, Tokyo, London—contemplating the layers of touch imparted on to them by his ancestors: Ukrainian immigrants in Paris, who bought them as marks of status and culture, then by their children playing with them as toys on salon floors, and later by the maid known only as Anna, who stuffed them into her mattress during the Nazi occupation of Austria, sleeping on them in hopes of one day repatriating them to the family she had worked for. As an artist whose days are spent handling materials, de Waal is well suited to recognizing the ways in which such stories are wordlessly imparted onto the objects. Responding to a question from the BBC’s Alan Yentob about these figures, de Waal notes that “these netsuke hold an extraordinary amount of other people’s touch within them, and that’s something I’m really passionate about... the idea that you can read other people’s lives through objects.”
Damer’s most recent works start with the scans of small objects, which he has found or assembled, which are printed as inkjet images before he works into them extensively with coloured pencil and watercolour. These layers alter our visual understanding, which has already been distorted by the narrow depth of field afforded by the scanner. The layer of shimmering graphite and chalky colour build up like the dust in the cracks of de Waal’s netsuke, forming a richness that requires no overt narrative. One intuitively recognizes this layering not only in what has built up upon the surfaces, but also in their softening, like that of a well-loved object, or like the shine imparted by the accumulated, ceaseless touching on the surface of a religious icon. They mark a moment of clarity; as if by inventorying the disparate elements of a fractured society and giving them attention that they might be able to rejoin at least parts of the whole. In their quiddity—their thingness—here they are: the individual players in the world of today, an encyclopedia of detritus, recorded as both container and threshold.


IV.
There is perhaps some of that romantic notion in the back of my head: reciprocal accord; that these prints, these objects, might gaze back at us. That they might entreaty us: hold things; hold them close. Bind together what you can save from atomization, from apathy, from benign neglect, malignant destruction. Refuse surrender. Hold the things you want to save and be willing to hold the things that are difficult. Forget the names of the things one sees. Then, pass on the sight to others—we’re not here long.